skip to main | skip to sidebar

A Girl with a Pearl EarringTitles are always about a thing in a moment.
Like this one is about an earring on a girl
Whose head is tilted so that the space beneath


Her ear is in the penumbra of that moment.

In another moment, the sun’s angle,
Relative to the tall, narrow window, will shift
And flatter the elbow, or delicate curve
Of the derriere on its way to the knee.

She will have finished asking if you want tea,
Which is why her head turned toward you
(And us), for just that moment, and only
As a courtesy to the moment – and the light. Posted by Jeff Roberts at 7:33 AM No comments: 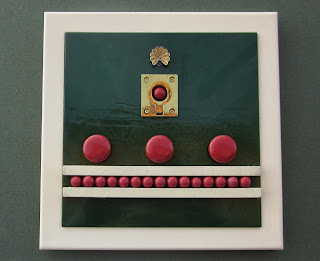 Lucy of light, patron of writers, what fun
To believe you removed your own eyes
To deprive a man of your beauty.

Today is the shortest day.
We don your white dress and red sash
And remember how

You lay upon a brothel floor
To be defiled by pagans
As a lesson to your virginity.

And when the pagans were sated
You lay upon a fire that did not burn
Until martyred by a sword.

Tonight, let your plated eyes
And wreath of candles
Light our dark and delicate dance.

Posted by Jeff Roberts at 6:21 PM No comments: 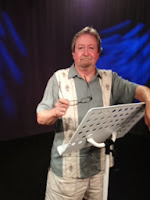 Jeff Roberts Reads His Poetry Sep 21, 2013 - Sponsored by Trails and Sails. From the studios of North Andover Community Access Media 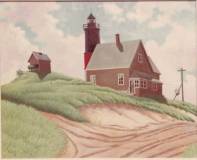 
The New Yorker never mentions
The smell of linseed oil in the basement
Where my late father painted shadows
Out of synch with their suns.


His paintings hang in my living room
And lean against walls in the attic
Echoing di Chirico, and Hopper, and Wyeth
Like good shoes in marble caverns.


Nothing like, but not that different from
Ellsworth Kelly’s delicate plant drawings
With their fine, palsied lines
Hanging this summer in the Met.


Posted by Jeff Roberts at 8:27 AM No comments:

I'll be Suzanne Schultz's guest on her show It's All About Art on Monday, July 15th, 2013. The show will stream from the Boston Neighborhood Network at 6-7 PM ET. You can watch by selecting the "Watch Now" link from the BNN home page (top right).
http://www.youtube.com/watch?v=I8OlRqI3JlY
Please join us as we discuss my art, art in general, and anything else that Suzanne wants to talk about.
About BNN: Boston Neighborhood Network Television is a nationally recognized, award-winning community media center and 501(c)(3) nonprofit which acts as a public forum for all Boston residents, nonprofit and community-based organizations and educational institutions providing them with affordable training and access to emerging media technologies.
About Suzanne Schultz: Suzanne is the founder of Canvas Fine Arts (http://www.canvasfinearts.com/) a full service artist management and representation company located in Boston. She places and promotes established and emerging artists in non-standard venues like hotel lobbies, high-end retail shops (Nieman Marcus, Thomas Moser), and in her own loft/salon/gallery. She also offers very informational and practical introduction to art marketing workshops with excellent food and personal attention.

The New Yorker doesn’t mention the artist
I knew as my father. Neither his
Meticulously sculpted temple garden
Nor his basement studio, where he potted
Saplings and painted for the last fifty years.

This is the week to go. The studio
Has lost some of its oily smells. The garden
I’m sure, is wild and untended. Although
I haven’t returned since his stroke, since
The hospital vigil with our one-sided conversations.

Hundreds of stalks of bamboo arc
Slightly toward the window over the porch.
Maples and dogwoods meet reds and pinks
That only Albers would introduce, at first
Seemingly at odds, but soon perfect together.

Every winter Dad painted until dawn
In the basement, as cheap, hand-wired speakers
Pushed Dylan and Baez through the dust.

Like di Chirico, his disorienting perspective
Resulted in men who were taller than trees.

Nothing like Ellsworth Kelly’s checkerboards
And geometries of bright, primary colors.
Nothing like those delicate plant drawings
With their fine, slightly palsied lines
Hanging this summer in the Met.


Posted by Jeff Roberts at 7:21 AM No comments: 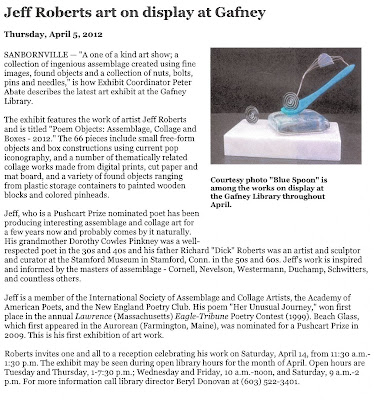 Poem Objects on disply at the Gafney Library in Sanbornville, NH through May 2nd, 2012.
Posted by Jeff Roberts at 9:13 AM No comments:

Jeff Roberts
No one likes everything. We explore. We discover. We winnow. When young we are silly in our devotion to music. We pretend. We imitate our favorite artists. When Midnight Train to Georgia comes on the radio, I still turn into a Pip. Jimmy Buffet’s A Pirate Looks at Forty still touches me. I am similarly affected when I encounter good and great art and poetry. Joseph Cornell, Seamus Heaney, Louise Nevelson, Louise Gluck, Giorgio de Chirico, William Carpenter, Dali. When I see a Duchamp that nails it for me, I have the urge to windmill my arm like Pete Townshend. What if we let art and poetry sneak up on us like music? What if art came in 3 minute bursts and had a volume knob? What if?